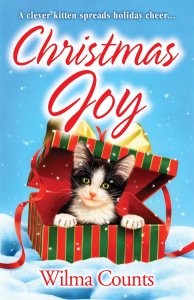 Some of my readers may be familiar with a novella I wrote a few years ago called “Christmas Joy” about a kitten that helps a little girl traumatized by her mother’s death. What many of you may not know is that I am not especially fond of cats.

No, I don’t dislike them; at worst, I’m indifferent and ignorant about felines. But I could not turn down an editor’s offer to write a novella even if it had to include a kitten. So I went out and bought a book on kittens and Googled cats and wrote the story. Wouldn’t you know “Christmas Joy” has been my most enduring success?!

Two years ago in late spring a TV repairman, searching for a good location for a cable said, “Those two kittens under your deck are real cute—and curious.” My reaction was, “Kittens? What kittens?” Turns out a mama cat had, a week or so before, decided that a spot beneath my deck was a perfect (purrfect?) place for her delivery room.

She was, of course, a stray, but she was not a wild, feral cat. She was obviously used to people. But her babies were not. And there were not two kittens, but six. Five with yellow and white stripes and one black and white one (I think I later identified both fathers as neighborhood pets.). Just as obviously she was a nursing mother and she and the babies were hungry.

What was I to do with seven hungry cats?! I called animal control who referred me to ARGONN (the Animal Rescue Group of Northern Nevada). Wonderful organization, that. It took a while for the rescue—nearly two weeks—during which I fed mama and her babies and delighted in the antics of the kittens. I had no idea there were so many kinds of cat food! And those babies were so darn cute!

Ignorant as I was/am about felines, I was sorely tempted to keep two of those kittens. But that summer I was to be gone for extended periods of time. It just was not practical. ARGONN assured me they would get proper care—shots, neutering, and then be given to good homes.

I was reminded of this adventure when a former student, Hannah Toon, posted a similar story on Facebook. I still kind of wish . . .